Is the Economy Expanding or Contracting?

⊕  Expanding, according to the method of calculating economic growth (gross domestic product or GDP) widely cited in the news. This quantification method, used by the U.S. Bureau of Economic Analysis, calculates growth by measuring total economy-wide spending. The spending expanded at an annualized rate of 2.3% in the 3rd quarter of 2020 (latest release). Here’s the BEA chart showing GDP over the last 4 years.

⊗  Contracting, according to a basic accounting identity formula widely used by economists, which basically states that economic growth equals the number of hours worked multiplied by productivity. First let’s look at productivity. Here’s the most recent update on productivity “growth,” from the Bureau of Economic Analysis dated Dec. 7, 2021:

This is the single worst productivity number in any quarter in 60 years.

The caveats: The “accounting identity” mentioned above tells us our economy contracted last quarter. However, this indication would disappear if the total number of hours worked rose sufficiently (*see math note below). According to the Bureau of Labor Statistics, employers added 1,135,000 new workers last quarter which is an increase of .7% in terms of more workers. Could .7% more workers add enough to overcome a 5.2% plunge in productivity? The math says no. Reality, unfortunately, isn’t quite so clear right now due to “the caveats” or reservations we must have on trusting many numbers these days – even more than usual.

Almost all the main caveats have been related to Covid-19 economic disruptions. This is still true today, and likely will be until the “economic fog of Covid” is behind us (which we dearly hope will be at the end of the current cold and flu season).

Overriding all caveats:
Inflation. Should it become self-perpetuating, the end of Covid won’t mean the end of this period of extreme economic uncertainty. The other overriding factor would be our long-deferred corporate debt liquidation. If this were to begin, it would become the dominant driver of economic performance.

* Math Note: As we all know, multiplying negative by positive numbers always results in negative numbers. In other words, based on the simple version of the equation, negative productivity would always mean the economy was contracting and couldn’t be offset regardless of the increase in hours worked. The equations used to prove the accounting identity correct for this. If you enjoy studying pages of equations, please let us know and we’ll get you the equations proving growth in the number of hours worked x productivity = GDP. 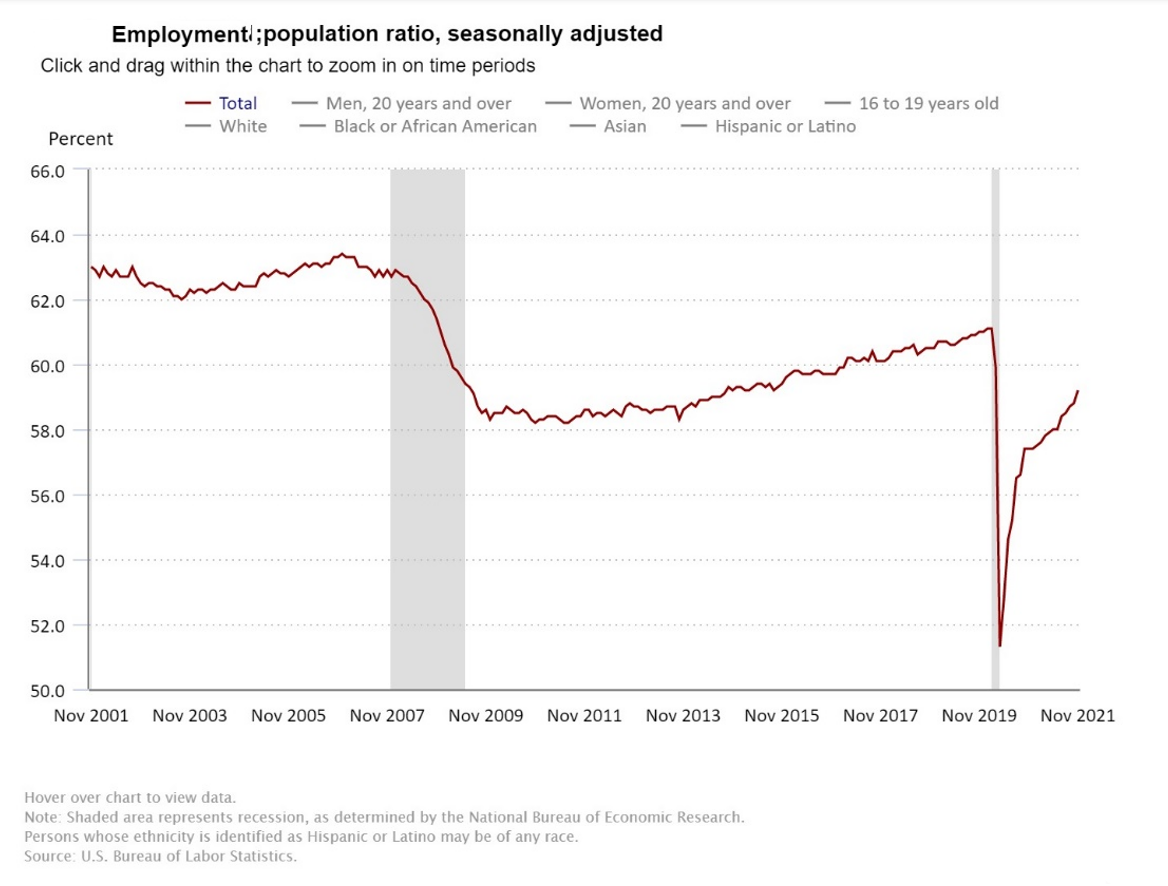 During the exact same time period, productivity – the other half of the economic growth equation – has fallen further and more rapidly than any time since the inflation-induced, severe recession which began in 1981. Last quarter productivity fell more than the worst quarter during that 1981-1982 recession. This was the second quarter of 1981 when it fell 4.9%, while productivity fell 5.2% last quarter (Q3 2021).

Inflation may to be the common cause of both the 1981 and our current drop in productivity. Inflation may fizzle out throughout this new year – or it could start feeding on itself through spiraling domestic wages and prices. The fact productivity is falling similarly to how it was in 1981 – right before a particularly severe recession and bout of inflation – may lead prudent investors to make sure they are protected from every outcome in 2022. We could have extreme inflation, strong deflation, or the first followed by the second in the same year or even quarter.

Personally, I doubt inflation will be mentioned much longer. Instead, I expect it to be like a quickly-burning fire that is extinguished as the economy and markets are doused with the first or second interest rate increase.  And yet, it may catch fire if the forces currently stoking it start to feed on each other. In other words, it could quickly get out of hand – or just as quickly not only end but completely reverse course.

As the time of writing, here is the most recent report from the U.S. Bureau of Economic Analysis on Personal Income and Outlays, November 2021: 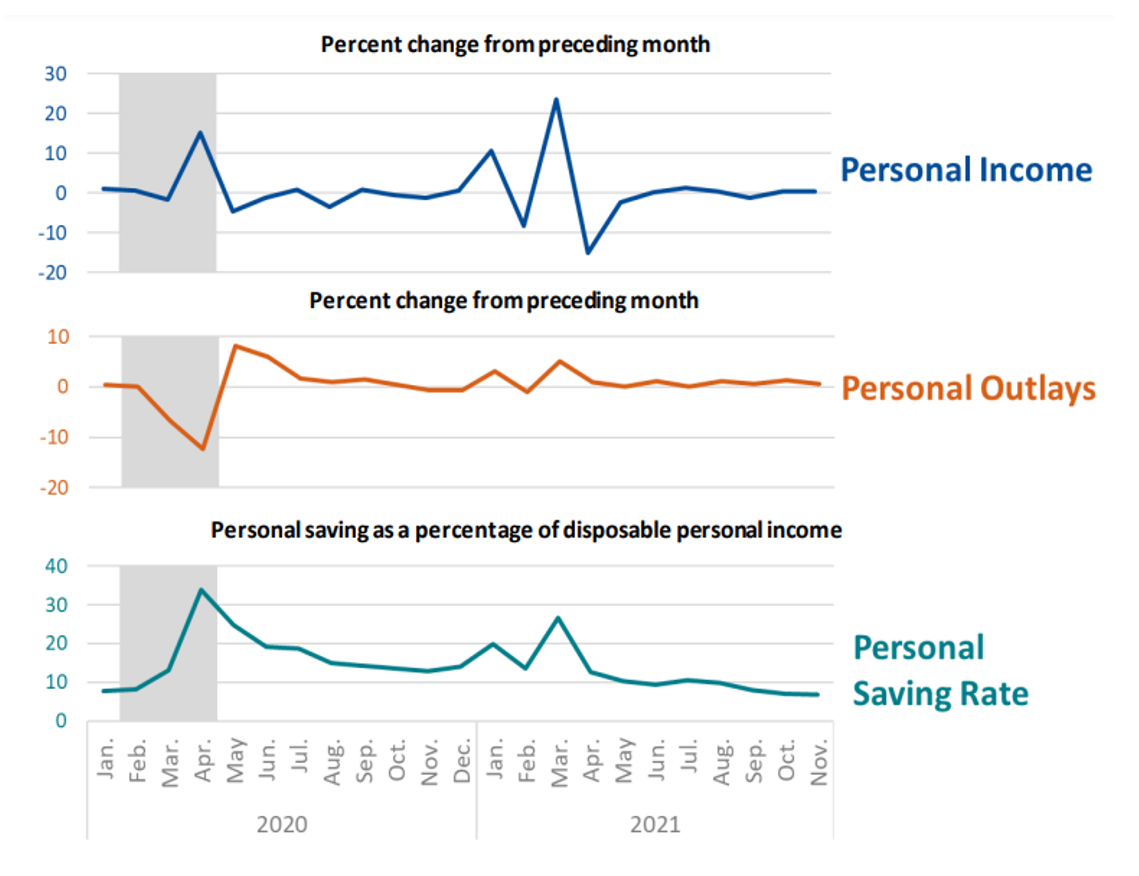 Personal income increased at a monthly rate of .4% in the latest report, for November, which is substantial. This was attributed to a combination of wage increases and tens of billions of dollars of federal government money which had been approved in previous Covid-related bills but not yet distributed.

The flip side of the positive news on personal income came, on December 16, with the Bureau of Labor Statistics’ announcement that:

Strong wage growth yet the earnings increases still led to less inflation-adjusted earnings for workers. This illustrates how inflation hurts both businesses and consumers, because employers have to pay higher wages while employees still have less money to buy goods and services.

Looking at the above chart, what concerns me most is that little September 2021 tick up in personal income. Most of this increase appears to be coming from wage increases.

We don’t want broad wage inflation. Personally, I still see it mainly on the lower end where it appears to be, overall, warranted. But if it spreads more broadly, to technical workers , or to what used to be called “middle-management,” then inflation could spike uncontrolled – until interest rates skyrocket to crush it. This would be a difficult economic experience for anyone who didn’t foresee it and invest accordingly.